Edie Sedgwick was an actress, disinherited heiress, fashion model, Andy Warhol ‘superstar’, Aries, and addict. She was hooked on speed, glam, attention, alcohol, and arguably a few other substances.  Where there is magic, charisma, beauty, and addiction, Neptune is never too far away.

She was Venus conjunct Uranus in Gemini and Gemini Rising. Neptune squared her Ascendant plus she had a packed 12th House. She was ultra-Neptunian. She had Mars in Pisces conjunct the Midheaven – anything on the Midheaven brings renown, ready or not.

Like Gia Carangi a few years later, her charisma kept her in the subconscious of the cultural and fashion public long after her untimely death. A cynic would argue that it’s the old ‘die young – stay pretty‘, permanent It-Girl syndrome.

Her fame came via Andy Warhol, who filmed her and admired her allure without predatory intent. They were both Outer Planet People.

Edie’s Venus-Uranus was on his North Node – Andy Warhol’s Venus-Pluto conjunction was on her North Node. They were Destiny Muse to one another. These two were never lovers, but their soulmating links were crazy.

Her Scorpio Moon could have helped her Phoenix through all the drugs, but she died young, on her Saturn Return, poor thing. 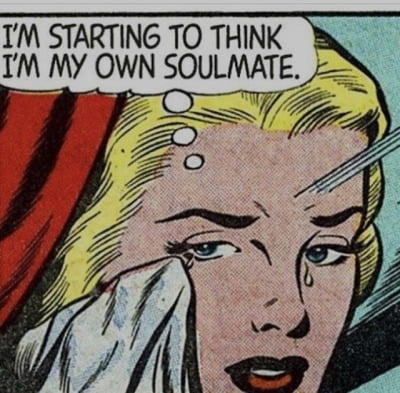 A Triple Virgo asks if some people are astrologically destined to be single?  There are some astrological alignments that make relationships less central for some… The Aquarius Moon algorithm is incomprehensible, but god, it works well. In an age like this, with little Air element, it can feel transcendental. Of…

Fascinating love story between the two. Sometimes, friendship love runs much deeper than romantic love.
May they both rest in peace.

i want those eyebrows!

Yikes, she is a bit like me. I have Gemini rising conjunct my Saturn and Mars in Pisces conjunct my Midheaven. I am still here, though. The rest is a mess of Libra and Sagg conjuncts, squares and trines, which must have balanced me out.(Doing the Saturn / Moon transit now).

re the MC i have to chuckle as the only conjunction I have aries ceres 9th house in a 5 degree orb. I will be known for my mothering??? I always joked if I had kids I would breed a small army for world takeover, and it’s the 9th house so everyone will be well traveled and highly versed in philosophy

I Have Mars in Aries on my MC and Chiron, I’m a bit of a noob and teaching myself, but I’m scratching my head as to what it could mean to me.

Saw the Sienna Miller movie of Edie’s life which left me rather unmoved actually. The first thing I see in this photo are these huge, sad, hungry eyes and I think of La Lohan. She would have done that role justice come to think of it.

i agree, sienna didn’t have the vulnerability to sufficiently pull off edie in that film. she was very two dimensional. lindsay would have done a much better job, living the tragedy as it were.

the first line made me chuckle. you take such names that have burned an icon like shape in pop culture and people do these crap homage things, with none of the fear and insecurity that living at the front of yourself or the culture gives you. I’ve never seen the film, I don’t think I need to. Enough fragments are littered in the lives of friends and my own arguably. There is a period of time say 20 where I can’t even look at photos of myself because I look so vacant, but we didn’t know that at the time.… Read more »

I hear you babe. It’s a look you know when you known pain.

And this photo reminds me of an Aries sun boy I know, the physicality, grace, youth and sense of risk are almost palpable.

Like a couple of others here, I’m interested in aspects to my midheaven. As you say, “anything on the Midheaven brings renown, ready or not. ” Well on my MH I have:
Pluto and Mercury in Virgo conjunct,
Saturn in Taurus trine,
Mars in Sagg. square Midheaven

I’d love to hear you extrapolate on this idea, because while I have a decent idea of what all my midheaven aspects mean for me, I’ve never thought “renown”. And as a Leo sun, that matters sometimes. 🙂

Might I ask, what orb do you use for the conjunction?

Oh Edie. Yes, I’ve had a long time thing for her too, ever since I read Jean Stein’s wonderful book ‘Edie: An American Biography’ when I was 16. She died two months after Ciao Manhattan was released. It’s a great piece of Cinema Verite. Very sad though. She was basically drugged by her mother since she was a child (so she couldn’t express her truth which was deemed ‘insane’). She didn’t have a hope in hell of getting through her Saturn return. I always cry when I watch that film.Thank you so much Mystic for revealing Edie’s astro profile. Being… Read more »

i have mars in scorpio in midheaven. what would make it renown, ready or not?

I’ve Moon on MC, I know the ‘ready or not’ very well now.

I had a huge crush on her when I was younger. Nothing odd since I love every Aries around the corner.

Definitely always been fascinated by Edie as well.

Didn’t know she had Mars conjunct her MC, I have that too (in Gem though). Wonder what that means… I’ve always been somewhat scared of my Mars-MC lol

I’m married to a Gemini. Do they ever age?! Even older they remain youthful at heart.
Yes, I agree about the Aries hair. Generally short. Pixie indeed!

Always said you were a youthquaker, Edie
A stormy little world shaker
Oh, Warhol’s darling queen, Edie
An angel with a broken wing

The dogs lay at your feet, Edie
Oh, wind caressed your cheek
Oh, stars wrapped in your hair
Ooh, life without a care
But you’re not there

Gotta love those shooting stars….and look at that angel nymph like face, gem rising indeed. The short cropped hair, so many Aries or Aries rising women I know have their hair like that. I’ve met a couple of people who hung out with Warhol, such amazing trippers who swept into my life , shook it up and disappeared into the night .

Thank you for writing about Edie, Mystic – I love her. Though her story is so tragic she was just so physically vibrant and beautiful and an absolute embodiment of the manic mid-60s energy in NYC. Ciao! Manhattan was the last film she made before she passed away, after she had moved away from New York and had gotten married and it’s a really fantastic biographical document of her rise and decline. Unfortunately she passed away before it was released. She’s one of those figures that I can’t imagine living longer than they did, like Brian Jones who died around… Read more »