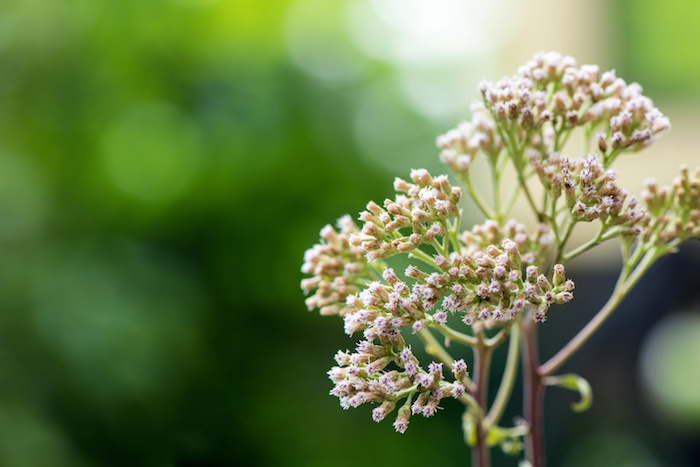 Fleabane is an unlikely herb of Venus. In 2021, I am going to transcribe the Housewitchery Mp3, add some extra content, and turn it into a book. Fleabane, Fridge-free living, Stinging Nettles and Chimney ghosts will be some of the new topics. Here, however, is something about Fleabane. (Yes, the fridge-free rant is imminent.) Read on if you’re in nest mode or having a Jupiter conjunct Hekate house witching moment.

Uranus in Taurus has inspired me to deepen my relationship with plants – I’ve been reading up on books like the Plant Magic one in the Mystic recommendations and Nicholas Culpepper‘s astrological associations. But what seemed to work the best with my plants – apart from remembering to water them and preventing the acid-rain-like dog wee from getting near them – was creating a connection. I simply conveyed that I would be grateful for some leaves but would never uproot the whole plant. Since then, the basil, in particular, has grown hyperbolically. It has vibe. And, I already mentioned the magical dandelion experience in the health bit of the Turbulent Times series.

So when a strange plant appeared, an arm-length tall, that had not been there the day before, I was intrigued. It was in a pot that just had soil in it but nothing planted, as I was waiting for a herb seedling. Was it a weird variety of Sage? Jupiter had just gone into Aquarius at the time and Sage is Jupiterian. But no, it wasn’t Sage. Mugwort?  The flower of Artemis? You can trace my incipient shamanic-botanic line of thought here. I even had a dream that it was an ancient Aztec remedy of immense power. But then the mystery plant was identified: Fleabane – a noxious weed!

Initial disappointment at such a dull-sounding thing turned to awe. Fleabane is loathed by councils and regional governments the world over because it is glycophosphate resistant – that’s right. It is apparently the only plant species that laughs in the face of Round-Up. This, to me, makes it magic. We should be revering it for such strength and investigating its medicinal properties. It was also known as Butterweed, Prideweed and – brilliantly – Semen of Hephaistos, swords-forger and jewelry maker to the Gods. Perhaps this has something to do with Culpepper and co classifying Fleabane as Venusian?

Dried Fleabane was burned in exorcisms and a pot of it growing outside the front door repelled pests, presumably fleas in particular. It pops up practically everywhere in history, noted as being used to make steam for sweat lodges by some of the First Nations people of America here, a 13th Century apotropaic cake recipe from China there. Studies On The Early Papacy says “fleabane in India is more precious than pepper.”

But my fave mention of it is in the fantastic Dwellers On The Threshold: Far from being a nuisance, it says, “The inhalation of the odours of linseed and fleabane seed, and roots of violet and parsley, will endow one with the power of foreseeing the future.”*

“Tear it up,” said the nursery and then the botanist who confirmed it to be Fleabane. “It spreads everywhere and you can’t kill it with weed spray.”  But the Fleabane stays. I know it’s a weed, a renegade: a plant once revered for its apparent powers to fix everything from diarrhea to hauntings – turned council enemy number one. And now it’s resisting the most lethal herbicide on the planet. But I can’t join the anti-fleabane brigade. You’d think that a natural and apparently stunningly effective insect repellent would have an application in companion planting but poison is presumably more profitable.

And guess what? Fleabane is listed in this inventory of plants found in ancient Aztec ruins. My dream was correct.

*Not a prescription or a suggestion – just keep a dream diary, seriously.

This stuff popped up all over our lawn last summer during a drought-never had seen it before. It was one of the few plants that were hardy, along with cosmos.

yes to the Basil vibe! Had this going on for several years now + parsley too. I always find plant signatures to very interesting and notice which plants grow well for peeps ~ and even more curious ~ which plants appear. Astrology + plants/herbs ~ yes please 🙂

Apart from pot plants have never planted anything in garden soil & have 2 fig trees & 2 Queensland maples growing. Maples have reached 2 stories & give me glorious dappled sunlight in Summer. Yes nature has come to me w/o any deliberation, the way it should be.
Used to love Culppepers tho’ not easy to put into practise with City living & thought you would need a astro, botany & chemistry degree to fully use it.

I’d suggest cutting off the flowering/seeding head. It’s not native to Australia, and while fine to grow pot, I wouldn’t want to contribute to the spread in the wild. Even if not near near the bush, seeds are carried on the wind and in storm water drains. When not controlled, weeds can out-compete native plants, smother native vegetation and have the potential to change fire regimes by providing fuel for wildfires. more info here: https://www.bushheritage.org.au/what-we-do/landscape-management/weeds

A tonne came up at my house too, so I am going to see if I can make it into an insect repellent.

Fantastic post Mystic, I love the detailed research and this is so interesting, I never knew about fleabane and will have to check it out! I want to announce to astro people who will understand: with the Uranus-Mars conjunction exactly on my Taurus Sun-SN, I decided to get rid of ALL of my stuff. ALL. OF. IT. It took me three weeks (I planned ahead) of practically having a second career in decluttering, spending 5-6 hours every night going through the stuff (my sleep schedule was so screwed up by this mission, I’m nocturnal now!). I had… thousands of items?… Read more »

Am about to start. My shed door is stuck & as soon as fixed a hard rubbish call & then replace with items for garage sale or give away. Have been slowly doing this for years it is simply mind boggling the stuff we accumulate. This multi Sagg is happiest with 2 cases & a tote max.
FREE is The Word.

Can anyone help please…as I’ve been looking through Mystic’s older post..I’ve been trying to find some stuff on 12th house people? Can’t find the search function on website…can anyone point me into the direction of a 12th house post? I’ve been seeing a guy who has Sun,Moon,Venus,Mercury,Jupiter,Pluto,Uranus all in the 12th!!!!! He’s Libra/Libra rising. I’m an 8th house person but not loaded up like that! So, I am intrigued!!??

Last edited 1 year ago by neptunia
0

The search gizmo (a magnifying glass symbol) is at the very very top left hand side of the page – above Mystic Medusa Astrology.
Wow, that’s a LOT in the 12th! …. goes with your name.
(my partner happens to be Libra/Libra Rising too, but only with Sun-Mercury in 12th)

A lot comes up with 12th House as the search term but I have not posted the actual 12th House people post yet.

whoopee, i look forward to this

I love this Mystic! Thank you x what a lovely read on a Sunday morning (cue “Easy” Faith No More in the background) …inspired me to look at some of your older posts. As always love your work. Xxxx

Love your plant raves Mystic. Apparently Semen of Hephaistos, (it will now always be that for me, lol) is popular with starlings too as they like to incorporate twigs of it & wild carrot in their nests for mite control. I had some in my tiny 18 sq meter garden in London which my neighbour used to call the weed garden because i only filled it up with local “weeds” whose seeds i collected from around the green urban nooks & crannies. After 3-4 yrs of letting them do their own thing the garden looked like a beautiful tiny oasis… Read more »

Brought out the magnifying glass & could only see ‘weeds are flowers’ not the rest but yes they just don’t have a good publicist.

“Weeds are flowers too,
Once you get to know them” (A A Milne)

(Hi Pegs, dang – usually the image gets bigger when you click on it)

I wonder if it repels wasps? In late summer my balcony is plagued with wasps. Anyone?

I have seen them gorge on fleabane. They don’t like spearmint or peppermint though.
But I’m almost tempted to get “Waspinator”, a fake wasp-nest made out of material that i’ve seen advertised. No chemicals involved – it acts as a visual decoy by mimicking an enemy wasp nest. Would love to know if it really works.

Thanks. Will plant one of the mints and look around for a waspinator. Can’t use sprays because I grow cherry tomatoes and chilis.

Hi Billy D, this is a long shot but I have discovered that ants can’t stand cloves! (Ants, not sure about wasps -lol). I have been keeping mine at bay with homemade “thieves oil” spray (recipe on this website I am sure!) Of which a key constituent is clove essential oil. (Clove spice powder neat also works – though have to re-apply. ) worth a try – also maybe check for what the unwanted visitors may symbolise – the ants have flagged to me where I need to work on my personal boundaries – but that’s just me!! Good luck.… Read more »

Any Housewitchery tome by MM is going to become a family heirloom in my house – Epic.. !! And thanks for today’s Very Accurate personal horoscope summation on a Mercury-Pluto trine, which read “ You see through people’s pretensions and glimpse deeper, magical fate-lines beneath the surface of your life. To see a raven, crow or magpie is a fabulous omen. .” Just yesterday afternoon a magpie sat on our front lawn for an hour just watching the sky (not hungry or injured, just looking – 2 hours if you count from when my April Aries husband walked past me saying “Old… Read more »

My single fleabane plant I noticed a few days ago now stays.Its destiny otherwise would have been to be removed some time when I was walking past and bothered to bend down (its young). Thankyou, I will now dedicate its own little patch where it can reproduce to its hearts content.

Leo on the Rise

Also fridge free living ….I’d love that but how do we live without fridge or freezer in modern life?

Boogeywookiie
MM Member
Reply to  Leo on the Rise

So excited for Housewitchery as a book!

Fascinating, as always. I am reading Entering Hekates Garden at the moment and really feeling this post. Thank you Mystic.

Amazing,resilient, botanical masterpiece. Grows wild through the cracks in the cement of my driveway. My daughter (witch in waiting) loves it because it is so tough and so useful.

Love this! Wow, the only plant that can withstand RoundUp!