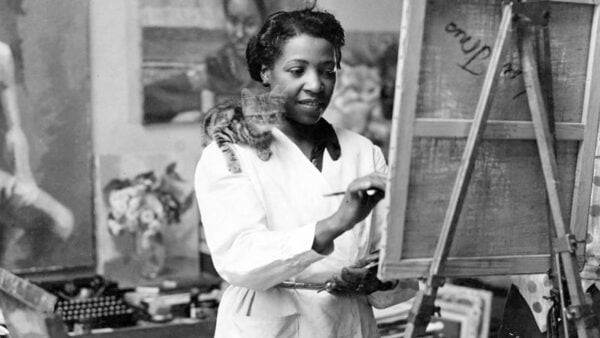 I’ve loved Cats and Astrology for centuries, so how could I not have known this weird fact? Cats are classically seen as Saturn-ruled! I don’t believe it. They’re Neptunian, legit dimension-tripping, time-nomadic magicians.

Yes, they can be aloof, and I can see how olden time astrologers could have contrasted Cats with the Jupiter-ruled Dogs, seeing an obvious dichotomy.

Does this sound Saturnine to you? Come on; they’re Neptunian for sure. To be fair, cats’ attribution to Saturn stems from the 11th Century, when Neptune’s presence was suspected by some but not confirmed. Perhaps the sedately elegant way the cat would go about acquiring food, shelter, and adoration sans obligation seemed like a stealthy Saturn play.

But the nine lives, affinity with witches and artists, ability to generate Schumann Resonance with their purring, penchant for popping up in dreams, and ability to traverse the shadow roads between lives? Pure Neptune. 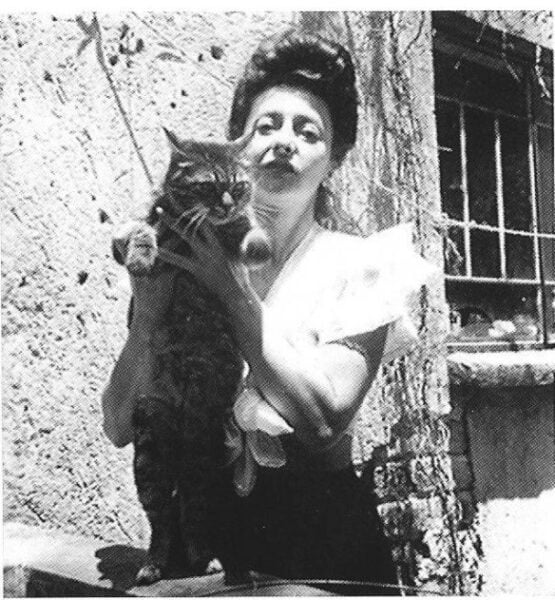 Turquoise Is The Sagittarius Talisman Stone

Both of my kitties appear to be Venus-ruled. The pure white one with emerald eyes is pure Libran style Beauty Queen elegance (but she’s either Sagg or Cap).The black one is all about Taurus – turf/territory, clean litter trays, good food and cuddles.

“sans obligation” – a Sagittarian, Piscean, Virgoan, another Capricornian, Aquarian and Libran (plus a nonplussed bc too busy Scorpion) all TESTIFY. We are being HELPED and pressured by my Cap Sis, whoim you know I totally adore and respect. The Capricorn wants to be helpful but is doing so on their timeframe which radically differs from ours, relies on being relied upon and therefore beautifully there in a crisis, but is somehow too busy to be in touch proactively bc they feel anyone will let them know when they have a need! Yes, the Piscean partner may be suffering and… Read more »

I’m confused. Are you talking about a human Cap or a cat Cap? Sorry but I haven’t been keeping up with people’s news for awhile … That’s because I have a human Cap of my own. He fucking pisses me off, sucks out all the energy and the space in the room and I found myself saying SHUT THE FUCK UP as some kind of mantra. We have split up for the millionth time because I just can’t stand his energy time suck crap for a second longer (Pluto conjunct Asc in Libra) and it’s always justified by some bullshit… Read more »

Yes, a human, and incorrect topic post! Was flipping between blog pages.

My cat Samson is Saturnine in the morning – but then he’s also Scorpio – which might explain the “Samson Stare” which equates to “where’s my freakin breakfast??”. He is also VERY particular about his litter tray, which I suppose could be a stealth “don’t look at my shit” Scorpio thing. He often meows without making an actual noise as if he’s psychically bellowing in my ear. Again Scorpio – he’s a spy and must not let strays hear his encoded messages. And if I haven’t made the bed properly. Not Happy! He does not like big clumps of bedding… Read more »

Oh gorgeous, some 9f my favourite cat companions who later haunted me, as in came into dreams to show where they ‘were’ in afterlife in the best visuals i could understand, were Scorpio cats. The boy was a huge golden cat, his sister dark and patched, tiny and agile, both furiously incredible hunters with completely different hunting styles. The boy let me teach him not to kill birds. I was truly angry when he first got a native, and i took him to it and taught him with my gestures and tone. Later a pigeon fell from a tree, and… Read more »

There should be a “heart/love”button. My other bestest cat Kitty was a total killer. Except for crows who would literally steal her food by dragging her food bowls out the back and call out to all their mates.She didn’t like them much and would stare at them without knowing what to actually do. When she first caught a bird – a fledgling native honey eater – I was so mad at her that I literally forced her mouth open and took the poor thing to a wild life rescue centre. Since I knew how to to apply bird emergency first… Read more »

My new kitten (getting to be a ca now!) allows me to walk him. We go down a bike path behind my house and I wait while he climbs various trees and then we move on. The other night, there was an interaction with a family of foxes in a parking lot on the other side of a fence from on the trail. I have been assured that foxes do not usually disturb cats, and I’m fairly sure he was thinking they might play with him but it still has me worried about when he gets big enough to go… Read more »

And when my feline beauty joins in when I sing three Aums, at the start of my yoga..with a distinct sound he uses for asia minor birds stalking…??

Deep comm7nion with collective and universal unconscious. Cat is doing as cat is made to do.

If you want to stop it killing, if cat does make the kills, you can use voice and tone, but it has to be intended throuh you, not from you. Feels like this is not the companionship you guys have, tho…

Mercury? Trickster energy with affection, acting needy when wandering into other houses, even thought they are “owned”?

Reflecting the householder’s need to feed, more like! And trading off it. Not all neighbours hashtag (feed random cats) 😁

Most cats are born in Libra/Scorpio season, which very much accounts for their grace, slinking away indifferently and stealthy, stalking abilities.

Ah, ok, i thought it was just my experience. I have this with dogs who love me, too. Interesting!

Getting a Covid kitty was the best this about this year. Perfect timing as a friend had gorgeous Tonkinese kitties to home. Kitties are definitely not saturnine. I’d add a pic but I’m not sure how.

I’d have to agree cats are Neptunian ruled.
My cats are highly empathic and attuned to human emotions not indifferent, bitchy or aloof. So more watery emotional, and a bit of a space-cadet.
Each cat I have has a completely different personality but each one does share a hedonistic love of lounging around, daydreaming and addicted to catnip.

My Ginger Girl Kit is Aries- has Uranian stares, but Toro love of
naps- demands her exercise at 6am and whenever you are headed for bed.

ER Vet said her muscle tone was amazing- thought she was 5 not 15 and gushed about her gorgeous coat. Timeless beauty- Moon Magic?

I see what you did there 😂

Hmmm, they are the masters of time, and space . Whether it’s stalking prey or just quickly working out the speed necessary to mount and balance on a 2mtr fence. From frozen still, so still that a bird is unaware of its presence when a meter away to the perfectly judged spring at lightning speed. They can be very Matrix like. Like they are manipulating the time warp, everything else slows down while they calculate the moment and coordinates of impact. So Saturn I get but Id say both, they are Saturnine on their day job, you’ve got to eat… Read more »

God, i just love your writing these days, DL!

And the Matrix. It’s rather Neptunian.

Thanks 😊 My favorite Matrix quote.

Neo, sooner or later you’re going to realize, just as I did, there’s a difference between knowing the path and walking the path.

Geebus, that is close to the bone, DL!

Is Laurence Fishburne a Pisces btw?? And Neo played by (channelled by) Keanu Reeves. Super Mars Neptune vibes. What about Carrie-Anne Moss’s neptunian vibe? Inquiring mind wants to know but lazing about on the look-up 😂

As anyone who has tried to move a cat out of a sunbeam knows, cats are solar.

Poikilothermic creatures also need the sun. And these guys are mammals, but what is their heart?

I’ve had cats since before I was born. My current two cats are very much within their sun signs…Pablo is a massive orange tabby who has to be a Taurus. He loves food and luxiurating on any soft surface and paper bags. He loves everyone but the dog. Paloma is a Virgo. A tiny, trim black kitty, who is very picky with her food. She tends to over groom, and if Pablo leaves an uncovered mess in the litter box, because he just can’t be bothered, she will cover it for him. She loves the dog. Ranger is probably a… Read more »

AQUARIUS (Saturn ruled). Cats are aquarian, not neptune. There is absolutely no confusion going on in their heads. Just in ours. That’s surely every Aquarian I’ve ever known who thinks its obvs why they are coming and going all hours of the day and night?

I feel it is Uranus too

Is it not that all cats are so capricious or calculating but just enigmatic by nature? Yes dogs do seem to be generally quite trusting…and a cat, might be sanguine but not necessarily ruthless. There are dogs that take great pleasure too in chasing cats…it may be pursuit that is real harassment…or predatory. I had a bright black cat once that very happily danced to the composer Sarti’s played piano pieces….

This makes so much such! Neptune is really strong in my chart and cats are essential in my life!

Just got 2 new kittens to join us in our new home..daughter is Piscean and a cat whisperer..there you go Neptune

Aha! I have a very Neptune dominant chart (Neptune in 10th as kite peak, aspecting my sun, moon, mars, jupiter, and pluto. Moon in Pisces aspecting neptune, venus, mars, uranus) I’ve always been a cat person, since I was a child. Grew up rescuing animals (all kinds but mostly cats) and had a gift for ferals, I even had one kitten who never really de-wilded. She lived most of the time (like 362 days of the year) outdoors. I used to sometimes have to visit her on the roof. Interestingly, after having only cats for 13 years from moving out… Read more »

One of my cats acted like a dog and my dog like a cat so I go by their individual charts.

That is such an AstroFiend thing to do! 😁

Yes, I’m inclined to agree with the Neptune theory…but perhaps the cat’s incredible survival instincts, and ability to go from wild, self sufficient animal to pampered pet is testimony to their ‘saturnian climbing skills’.