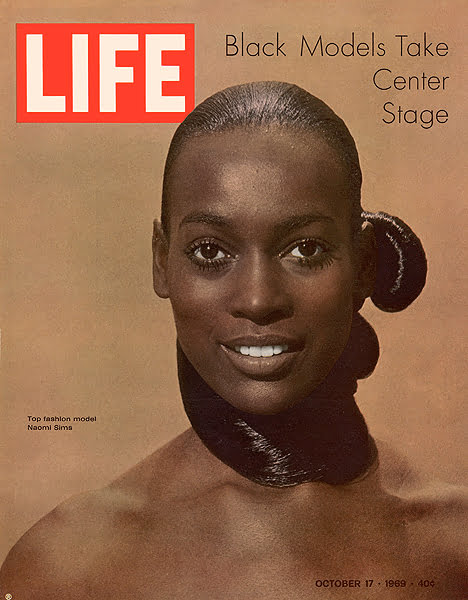 After the ultra-Neptunian Donyale Luna (Astrology and The Black Supermodels Part 1) broke the barrier, Naomi Sims hurtled straight after her and into the American public eye.

She was born in the post-World War 1 baby boom, an Aries with Mars, Saturn + Pluto conjunct in Leo and Jupiter in Sagittarius. A trio of linked Fire sign features like this is called a Grand Fire Trine. People who are born with it are fierce. They’re like human meteors, blazing around the place lighting other people’s lives, making things happen via willpower and pure vibe.

Sims would have needed every nano-gram of her Mars-Saturn stoicism to navigate a complex childhood in Mississippi, abandoned by a father described as an “absolute bum,” and forced into foster homes from the age of ten, despite her mother wanting to keep her. She became a teenage Avon lady and avid saver/scholar, winning a scholarship to the Fashion Institute of Technology as well as studying psychology at night school.

Her career was a series of firsts: First African-American model to be on the cover of the Ladies Home Journal – then arguably one of the most mainstream and white magazines on earth, the Life mag cover above, and starring in the first interracial big-budget television advertisement.  As Robin Givhan, the Washington Post’s fashion critic wrote, “Naomi Sims pushed black beauty into the mainstream in a way that was more provocative and resonant than a million “black issues” of Italian Vogue.” 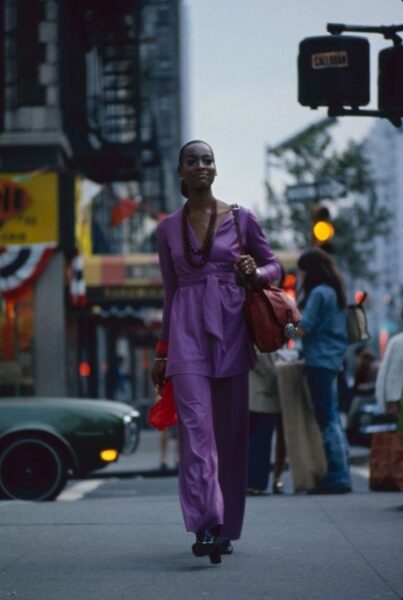 She saw herself as an entrepreneur first, a model second. She had to be. Ridiculously, no model agency would represent her, despite her growing popularity and even after the mainstream magazine covers. Their prejudice obviously overcame their commercial acumen because Naomi Sims represented herself and became enormously successful.

To the public, she epitomized the ‘Black is Beautiful‘ movement. Sims was the prototypal model-entrepreneur via a multi-million dollar wig and hair extension business. Well before it was de rigeur, she riffed off her popularity to create, manufacture, market, and distribute her own product.

She produced perfumes, mentored younger models like Beverley Johnson, and wrote/published books on etiquette,  beauty, and fashion industry success: “when you step onto the runway or in front of the camera, you will be in your element and you will be confident. Your practice has bought you to a peak of self-awareness that allows you to concentrate on the particulars of the job.” Halston, the iconic Seventies designer, immediately saw her potential and became the first major fashion house to use Sims in everything. He was Taurus but with a similar grand zinger of a Fire Trine (Mercury, Mars + Uranus in Aries, Moon in Sagittarius and Jupiter in Leo). He was also one of the driving forces behind a pivotal moment for Neptune in Sagittarius, disco, culture, fashion, and African-American supermodels.

It was 1973: Naomi Sims, aged 25, had just gotten married – her “interracial relationship” was apparently a “scandal” in some quarters – gone on the cover of Cosmopolitan magazine and retired from modeling to run her business. In a fashion history moment called the Battle At Versailles, five top American designers faced off against their French counterparts.

At that point, French style and culture were automatically seen as superior. The A-lister heavy audience (Princess Grace, Elizabeth Taylor, Andy Warhol, and many other genuine influencers), let alone the industry, were not expecting a Halston or his ilk to upstage – say – Yves Saint Laurent or Oscar de la Renta. 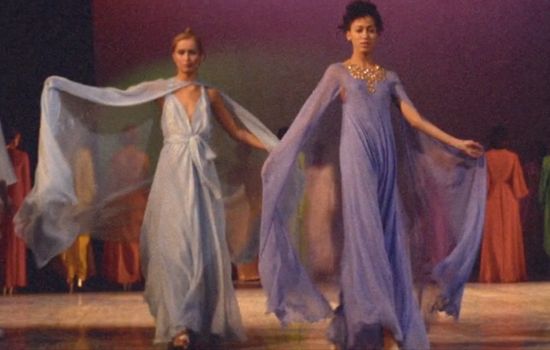 But they did! The American cohort arrived with an unprecedented number of African-American supermodels and took huge creative risks that made the catwalk more performance-couture than the usual staid stalking up and down the catwalk. FYI the sportswear designer Anne Klein’s segment was to the soundtrack of Scorpio Rising. The event became a cultural moment, disco-shamanic, and liberating. It was classic Neptune in Sagittarius, which was trine Halston’s Leo Midheaven that week by the way.

(Extra: The North Node was conjunct the Galactic Center, the mystery vortex that the Sun itself revolves around. Currently, the South Node is near the Galactic Centre, until September. Any Outer Planet or Nodal activation of this point signals social shifts that seem drastic but feel natural and are embodied in a mass trend.)

The former model, fashion historian, and quintuple Virgo Barbara Summers said that in a heartbeat, the trend-makers pivoted away from the concept of the African model as an exotic novelty. “At Versailles, they had never seen so many flagrantly beautiful black women at one time, so that was a revolution,” she says. “The audience was used to the chilly remoteness of the models who showcased European couture.

“Black girls changed all that; they plugged fashion into what was happening now, and that meant R&B, rock ‘n’ roll, dancing, music, popular culture,” she says. “They brought the electricity of popular culture into fashion.” 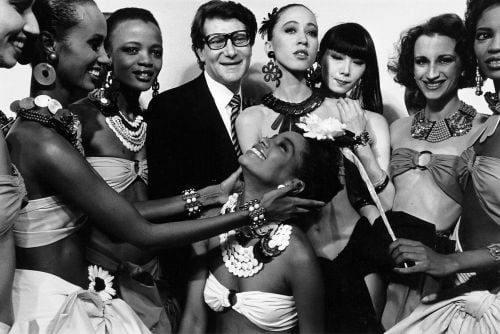 Arguably, no French designer was more open to being electrified than Yves Saint Laurent, the pre-eminent tastemaker of that era. He was a triple Leo (Sun, Venus + Mercury) with Aquarius Rising – the lightning rod for Zeitgeist – and Moon in Capricorn. But his most significant astro was Uranus square his Sun and Mars conjunct Pluto in Cancer.

His business partner said he was “born with a nervous breakdown” but isn’t that just how Mars-Pluto/Uranian/Outer Planet people come across? This description of him (from one of his executives) could be an Aquarius Ascendant or Uranus Rising delineation: “He needed his distance. He was easily amused, but nothing mediocre amused him.”

A few years after that Versailles show, Yves Saint Laurent was using women of color across all his campaigns, compelling his competitors to follow suit or seem out of touch. He frequently extolled their “cool” in the media. Years later, Naomi Campbell credited him with being instrumental in her becoming the first black model on the cover of French Vogue.

“Black models are privileged to have attitudes and gestures that are totally modern. They are, for me, magic, the true history of the modern woman by their expression and irresistible quality of movement. In order to design, I need these girls with the  most dynamic and modern proportions.”
Y.S.L. 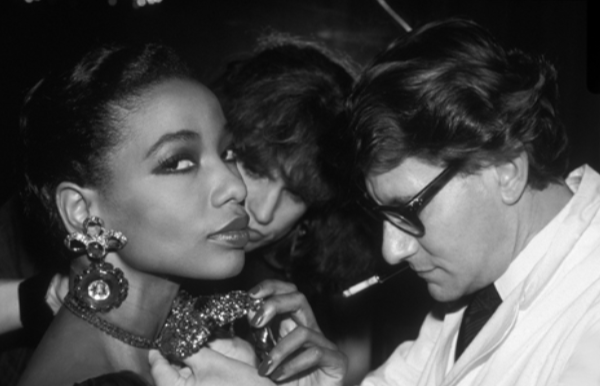 That style-possessed designers selecting beautiful people to rep their brands, shift product, or represent the spirit of their work created controversy when these people were not white is a huge indictment on the values of the time.

In January 1978, Mounia Orosemane – a radiant Capricorn* from Martinique – became the first black model to appear in a French Haute Couture show. While that was Y.S.L. and she was the designer’s “muse”, that coup led to work for her with Chanel, Versace, and multiple other luxury brands, clearing the way for other women of color.

But Women’s Wear Daily – then the industry authority – carped that “the runways of Paris are beginning to look like 125th Street in Harlem” and Mounia’s spectacular career was blighted by everyday racism. Her fellow models clocked it and, in many cases, tried to call it out. For example, while white models were waved through checkpoints and border control by bug-eyed security guards, the African-looking models would be scrutinized.

Earlier in Mounia’s working life, a V.I.P. client threatened to withdraw their patronage from Givenchy because of – as she overheard them saying – “the black girl in the house.” The Givenchy fashion team had discovered her while she was working as an airport announcer and bought her to Paris. It’s not clear if the client walked or Mounia did but she left Givenchy for Y.S.L. at about the same time.

And despite her image being everywhere as the aspirational It-girl of the time, the standard newspaper commentary on her carried a level of snark that was not applied to her peers, such as Jerry Hall, Cheryl Tiegs, Marie Helvin and Patti Hansen. Below is an example – “controversial”? “Said to be haughty?” “Caused a scandal?”  They are baseless smears, obviously.  The only controversy was her color, the scandal was racism on the part of someone else, and “haughty” or similar epithets are what people say when they don’t think your success is “deserved” or want to shame someone but that person is more important than they are. 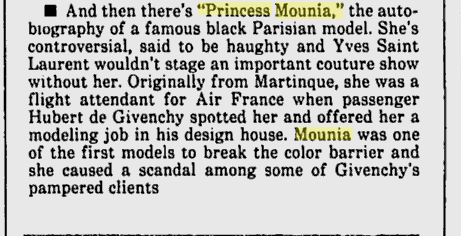 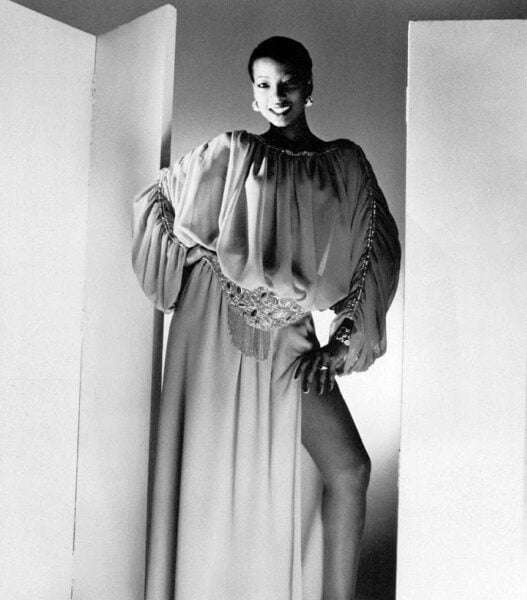 These days, Mounia is an artist and musician in her native Martinique, zapping in and out of super couture scenes like this shoot for Alexis Mabille. Her memoirs apparently detailed the ‘cultural barriers’ she had to overcome but annoyingly, the book is out of print and not on digital.

But this 1980 Washington Post interview with Naomi Sims says it all:  “The idea of a very successful black woman scares people. They want to impose upon me their anxieties, insecurities, love, hate . . . and that makes me uncomfortable.” In 1972 she turned down the lead role in Cleopatra Jones, citing the “appalling stereotyping of black people” and writing what she described as a “scathing” letter to the studio that outlined her rationale.

These women and Donyale Luna are not just interesting because of the struggles/triumphs of their individual careers: their emergence in mainstream media, culture, and fashion were the epitome of visibility.  They also set the scene for the Eighties and Nineties phenoms of Beverley Johnson, Iman, Tyra Banks, and Naomi Campbell.

To Be Continued in Part Three. Read Part One here.

*Mounia’s birthdate is not publicly available but I have managed to confirm that her birthday is in early January, as in Capricorn. 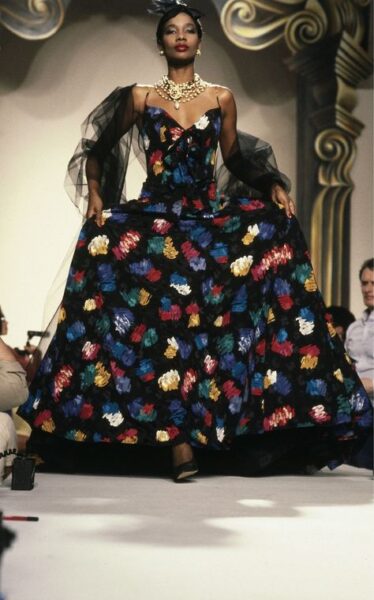 My mother still has a copy of Naomi Sims’ book on hair. I would not have made it through my teenage years without it. My mother and I have very different hair types, body structures, etc. When I came upon this book and it stated there were at least 9 different types of hair among African Americans, I was no longer ashamed. I started trying some of her methods and it worked for me. It sounds so simple now, but my teenage years were filled with emotions about not fitting in.

I love this series~!

Brilliant! I am loving this series!

If you ever write a history book, I will be the first to buy it! Love this series so much!

Yesss thank you for this series! I love it so much!!