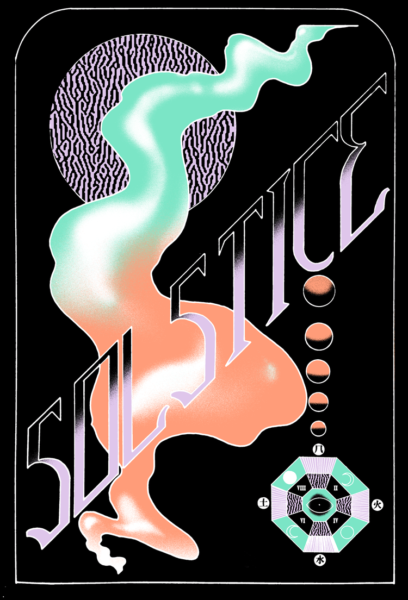 Solstices, Winter or Summer, are always spooked up. I’ve said this before but as a reminder, they’re cosmobiologically intense. Even though 21st Century people are not as attuned to seasons, it’s impossible to not feel something at the Solstice.

Gravity and the Schumann Resonance frequency are more intense. It sets off all manner of mammalian hormone circuitry and conflicting commands: Breed, no – Eat, Hibernate, Take your Turf back, Wait – Mate?  n. This year it comes complete with a Solar Eclipse and the Solar Minimum.

Nobody knows yet if this will end up being a lengthy Solar Minimum or not but the current consequence is a Space Age record amount of outer-space rays. The most recent high was in December 2009 and we’re about to peak above that.

So, if you’re edgy – good. It would be completely weird if you weren’t. Just as Eclipses are amplified New (or Full) Moons, this is an intensified Solstice experience.

Here is my pep talk for this:

(1) The wild magic and potent awareness are real. Trust them and try not to sludge down the brightness by going on a guilt-bender or tormenting your liver with totally toxic sustenance.

(2) Vesta is conjunct the Sun + Moon, promising a creative resurrection for anyone willing to put up with the s**t-fest of unpleasant emotions that precede such breakthroughs.

(3) Eros is conjunct Psyche in Taurus for the next week – this is fantastic for relationships based on some strange formula of sex, fate, and money. And, if you have the opportunity, for rethinking physical routines and grooming patterns.

(4) It’s a fantastic time to feel the change of direction you’ve already embarked on. Possibility: An affirmation or illustration of the trip you’ve been on since the last June Solstice. If you don’t remember a Solstice to Solstice with so much fuqery, it’s not just you. This Eclipse Season (the one now coming to a close) activated the Solstice points AND then Saturn/Pluto piled on.

(5) Finally, a House-Witchery suggestion. The herb Yarrow was traditionally associated with the Solstice* and has multiple benefits, including protection and calm.

*Speak to a herbalist or your medical advisor before you try anything new.

But with that in mind & as this article mentions Eros/Psyche, I hoped for an astro take re: news of the planned exploration of asteroid Psyche noted in a recent Forbes article on the NASA (piggybacked on SpaceX) spacecraft of the same name as the asteroid, currently in the works. Of course the asteroid seems appropriately of high worth, gilded, etc. Seems interesting timing as asteroid Psyche has just been left behind by Eros as both head toward the NN.

I really was so worried that I might not snot cry and have heart palpitations.

Because of course it did.

The part of me that still likes snarky retorts typed this. It’s a tool.

Not like anyone’s keeping tabs, but by this time next year my midheaven will move into leo, my sun and mercury will move into gemini at the same time.

Seems like quite a big tadahh kind of thing. I’m sure it won’t hurt a bit.

I was about to go on research bender for esoteric concept “tadahh” lol. Do you mean progressions?

Oh please oh please I will definitely take being the originator of the tadahh movement.

I’ve really just got to go whole hog on woo at this point, I out a literal fire last night. Send a caftan and Tell people I’m from “elsewhere”

I just need that one assistant.

“Vesta is conjunct the Sun + Moon, promising a creative resurrection for anyone willing to put up with the s**t-fest of unpleasant emotions that precede such breakthroughs.”

Love this phrase. Seriusly. It pertain so much to my current situation, maybe because the Sun + Moon was on my Venus (so yes creative resurrection) in Kataka in X house.
I would love for this rollercoaster to end soon, because is screwing with my sleep patterns.

I think my experience is somewhat related to the daily astro atmosphere and maybe that latest news of maybe a new particle in physics being found. For the last two days I keep getting a vague flastback to an event that supposedly happened last summer, only that it didn’t, because, hello, I would remember that. But the flashbacks keep happening and becoming more and more vivid. So I’m thinking maybe some sort of tear happen in time and space continuum and it is leaking through. Like paraller dimensions coincide? Did anyone have something similar happen to them. It does not… Read more »

It’s real Iv lived it similar..Dont fight it try to keep calm so you can make sense of it and go with the flow..The parallel dimension and universe is very real even though at times seeming surreal.

It has been an intense eclipse!

I stopped reading at tight jaw/hip/psoas. Last week saw a neurologist who was shocked at the atrophied state of my shoulder and neck muscles. Is there an Astro remedy for this nonsense?

Might seem daft but yarrow was on my mind and rue. Weird. Ok. Today I have slept. Since lockdown I’ve realised that the odd duvet day is tonic for me. So I’m listening to my body and doing what it calls for. I’ve slept and slept.

Sleeping is great. There’s a lot to integrate these days and the mental calisthenics are exhausting

Wish Upon a Star
MM Member
Reply to  emg

Thank you for this post, hits in the right places. I have been using the yarrow tincture I made last summer to try to counter digestive sluggishness. I’m like, can I get any more lockdown sloooow? Time slides as I try and work in me + white supremacy exercises into my daily schedule on top of the usual journalling. Am I getting much other than my daily practices plus keeping on top of chores and a midsummer garden? Not really. But I guess that some times are just like this. The eclipse is in my 7th house, where I also… Read more »

About to light the afternoon fire and bring in this event. Your words as always are on point and added to this the art work is gorgeous.

I enjoy the term plague-snacking so much

I am really getting hammered by rusted-on negative thought patterns around relationships and not being able to believe I’m ‘good enough’ to be loved. It is causing huge anxiety and so all the bad coping mechanisms are coming out. I’m in a fantastic relationship, plus at the end of a massive career/identity era, so I suppose the timing is no accident. The dark moon has been brutal with realisations, however I’m trying to accept them, indeed welcome them, for what they are. Neptune is squaring my nodes all year plus the Pluto-Jupe-Saturn thing will happen on the cusp of my… Read more »

I so hear you re the rusted on negative thought patterns around relationships, same here. I’m so over it, and myself.

I started doing Codependents Anonymous via Zoom when the plague began – the group is in a faraway city 3 time-zones away which helps my recognition paranoia. It’s been life-changing and super revitalizing for my relationships.

Can I have Daniel Craig skyclad ?

LotusFlower
MM Member
Reply to  Wish Upon a Star

emg
MM Member
Reply to  Wish Upon a Star

How funny, I am growing a lot of yarrow right now

This is somehow helping me https://youtu.be/91ViRjiDOO8