Astrology and black supermodels may seem like a trite topic, given what’s going on in the world, but no.  The supermodels on the cover of magazines and repping mega-brands – are at the intersection of art and commerce. They embody our aspirations or what big business wants us to aspire to. They’re selling but they’re also channeling.

In the early 20th Century, most models were society women, presented as having impeccable taste and photographed in lavish surroundings. Everyone but them was excluded by default. Technically, someone could boggle at Mrs. J.P. Moneybag’s posh rocks, orchids, or Silver Wraith but none of it was for sale.

That all altered with the rise of ready to wear fashion, mass beauty products, and the Big & Glossy style magazines.  Next came models who weren’t sleeping with the photographer or married to Old Money.  Provided you were unusually tall, thin, and freakishly beautiful, a girl from any background could become a model and earn brilliant money. Unless she was black. Then, in a form of fashion apartheid, you were only allowed to appear in race-specific publications, such as Ebony.

Astrology and Black Supermodels Begins With Donyale Luna, a Neptunian

And, of course, the lack of anyone who remotely resembles you amongst the pantheon of mainstream media style ideals and “what every woman wants this season” is an exclusion.  As Oprah Winfrey said to the former Sudanese refugee turned supermodel Alek Wek in 1998, “if you were on the cover of a magazine when I was growing up, I would have had a different concept of who I was.”

But well before Alek Wek, Liya Kebede, Jourdan Dunn, Winnie Harlow, Duckie Thot, and Precious Lee, there were trailblazers. It’s arguable (and no, I actually don’t want to argue over it, as this post is the first of a series) that the first black supermodel was Donyale Luna. She was an ultra-Neptunian Virgo, with Jupiter conjunct Neptune in Libra and – probably – rising.

How Neptunian was the woman? She had a daughter she called Dream and starred as a witch in a Fellini movie. Born in Detroit, she changed her name when she was a child – Donyale means “mother of art” and Luna, as we know, means Moon. Described by people in her home-town as “weird from birth,” she was a six-foot-tall ethereal-looking extreme beauty who hated to wear shoes.

“I have many visions of myself when I go through photographic trips,” Luna once said. I’ve gone through periods from Nefertiti to Josephine Baker.” She wore patchouli oil, wrote hand-illustrated fairy tales, and at one point, had a secret husband who was “also famous.”

She lied all the time, probably to create cover, and invented ‘Future Visioning,’ her form of meditation. Her most frequent and understandable fib was that her father was not a “brutal” alcoholic and abusive but an amazing interior designer who’d died in Hawaii.  Her last name could have been Neptune, not the Moon. People often thought she was a mirage or their hallucination. 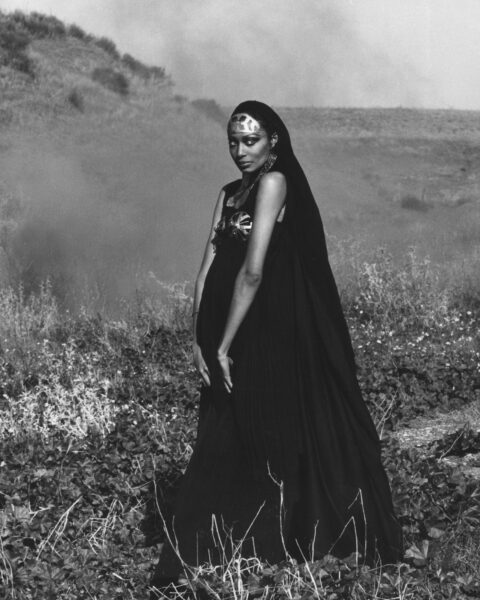 People Thought She Was A Mirage

Donyale Luna went to New York in October 1964 and became an immediate sensation. She scored a year-long contract with Harper’s Bazaar and exactly the sort of avant-garde and performance art opportunities she’d envisioned.  In January 1965, as Saturn opposed her Virgo Sun, she appeared on the cover of Harper’s Bazaar, – albeit as a sketch – and her mother killed her father in self-defense. She copped flack for not going back to Detroit for the funeral but from a contemporary perspective, she could have been traumatized from her childhood.

Instead, she got married to her secret husband (apparently at the home of the musician Miles Davis) and did screen tests with Andy Warhol. Two months later, an extensive fashion spread featuring Donyale was published in Harper’s Bazaar.  It was lensed by Richard Avedon, then one of the most influential photographers in fashion.

He was not only iconic in terms of his talents. A Taurus with one of those permanently zap-zoned Saturn-Pluto squares, Avedon was fresh off the ground-breaking publication of Nothing Personal, a collab with the writer James Baldwin. It showcased the cognitive dissonance between the mass media’s portrayal of race relations/society and the delusional reality.

“I’ve Gone Through Visions From Nefertiti To Josephine Baker”

His images of Donyale Luna were a buzz-creating, big-selling cult-hit but advertisers flipped. The publisher, William Randolph Hearst, banned the photographer from ever using her again. She later said she felt not ‘black-activist’ enough for the civil rights movement and not, obviously, white enough for the magazines. Or, rather, the advertisers that the editors were dependent on for revenue.

“My customers come from Texas,” said one. “To see a black girl in a dress that they might wear is to absolutely end the possibility that they might buy the dress.” She fled to London, became even more of an It-Person and – above – the first black model to appear on any Vogue cover, ever.  But apparently, the hand over the face gesture was at the request of Vogue’s editors, to hide her ethnicity. Honestly, of all the faces to hide by request.

Nonetheless, this historic ‘black is beautiful’ affirmation began a new wave. Donyale never discussed her background and perturbed people who wanted her to do more with her profile. She said she didn’t care about racial identity, but in London, she filed a complaint against a hotel for racial discrimination.

“If it brings about more jobs for Mexicans, Asians, Native Americans, Africans, groovy.”

The sheer volume of beautiful images of her is testament to the fact that she kept working, earning, and performing. She’s described as never staying still and of being ‘always busy’ – a true Virgo. Somewhere along the journey, drugs crept in. The girl from Detroit – or the Moon – who never drank or smoke and self-converted to Catholicism at the age of 14 became an advocate for L.S.D.

Luna moved to Italy where she acted, wrote, performed, had her baby Dream, and posed for Italian Playboy on her Saturn Return.

She remained a pillar of the Beautiful Person brigade until her death at the age of 33, from an accidental drug overdose. Neptune has a savage undertow and that year it was opposing her Mars, never a good time to test the edges of perception.

I see her as a particularly potent and glamorous ghost, haunting experimental theatre rehearsals and talking to Warhol, a Muse to many.

Part Two of Astrology and Black Supermodels to follow! 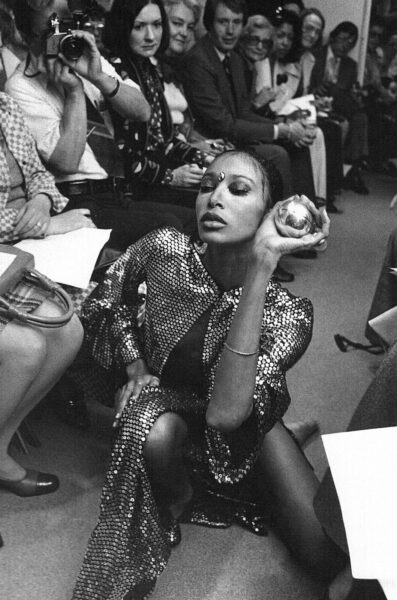 This post was everything. Thank you, Mystic. I love you!!

What an interesting post. I’m 6ft and my feet hurt so bad. I have to wear shoes due to intense pain. I’ll need to get a GP referral to a podiatrist. What an inspiration and sad end for this glamorous lady. I kinda suspect her Saturn return had been tough and thus it ended up in an overdose. So tragic. Yesterday, aka Moon day I was accused of being racist. Oh hell no. It was not the case, you got to realise a person’s story and have empathy. A nurse on night duty was not Trauma informed or aware of… Read more »

I remember her as was just starting my apprenticeship in fashion and beauty in ’64 and every fashion magazine produced at time was in the salon to be poured over. She was a rare exotic then.Maybe that’s why sunning covered in oil was so popular, to become brown like Luna.

What an amazing post. A great example of Ultra-Neptunian. My first thought went to Beverly Johnson so it’s great to find there was another beautiful black woman that went before. There’s something regal about her and then I see she has Venus, Merc, and Pluto in Leo. What a queen. It’s just a pity I had never heard of her. Thank you Mystic.

Really enjoyed this, thanks. I wonder what happened to her daughter?

Scratch that, I’ve just found an article written by her daughter

I was just thinking about Donyale Luna because I am listening to this podcast called The C-Word and was thinking about how she would be a perfect person for them to profile. Then I saw the email yesterday with her image! I think she is one of the most striking women ever and her history is fascinating. Someone who knew her in Detroit has a good blog about her life, lots of details

She is very striking. All the Neptune make so much sense.

The Oprah Winfrey quote reminded me of a recent incident here in OZ where a black model was used in the beauty section of a Myer catalogue. A (presumably white) woman wrote a letter of complaint. How could she possibly identify with the girl in the picture?
Tall, beautiful, slim, barely an adult and wrinkle free she clearly had no problem with… just the colour of her skin.

Thank you! I live for these posts. Her move to Europe reminds me of Josephine Baker’s. What a shame she isn’t around now to feature in her biopic. I’d watch that.

I was taken away with this post! People fascinate me, but she stands out for sure. As I was reading, I thought to myself, “Why have I never seen this gorgeous woman?” I used to live for fashion magazines & models who made everything beautiful. Just when I thought Beverly Johnson was the first black supermodel, here is Ms. Luna. I really got sad when I read she is long passed. What could have been had she still been alive. Maybe her soul was just too cool for Earth and she juiced life like she didn’t have tomorrow. I feel… Read more »

Fascinating! Thank you. I am off to research more about this woman. I have only really been exposed to Beverly Johnson referenced as the first or most significant first black supermodel.