The author Thomas Pynchon (Gravity’s Rainbow, Inherent Vice) has a hot take in Pluto in two of his books, maybe more. Maybe his natal Jupiter opposite Pluto helps him tune into it more. When you are born with that bit of business, you do Pluto with dubstep; it’s part of your rhythm. When you get ambitious or excited by ideas; hello Uncle Pluto.

“Pluto is in my sign now, held tight in its claws. It moves so slowly and so far away…but it will burst out. It is the grim phoenix which creates its own holocaust…deliberate resurrection. Staged. Under control. No grace, no interventions by God.”
Gravity’s Rainbow

The Arts Of Pluto

He writes of the “arts of Pluto”, “Pluto alerts”, “Plutonian wives”  and a Pluto “stuck to within a few degrees of its cusp, trying to get out of Libra.”

And Mithras-obsessed sappers who “…seeking Ormazd, God of Light, found rather a condensed blackness, which hides light within, till set aflame…”

Pynchon is good on Plutocrats: “that’s not the way it works, said Scarsdale Vibe, or so we always hear the Plutocracy complaining.” He portrays them as hardcore occult hustlers, not so much uncaring about the Earth or other elements but seeing themselves as an elemental frequency in competition with it.  And one of his early sub-plots features the realm of Chthonica, ruled by Princess Plutonia.

You could go looking for interviews with him, to mine insight into his experience of Pluto but in classic Plutonian fashion, he is famously a recluse. He doesn’t give interviews but let himself be rendered as a Simpson’s character. A Seventies Playboy magazine article complained that the journalist’s wife had left him for the author and alleged that Pynchon was part of covert government experiments into L.S.D.

His Taurus Sun is near Uranus (not quite conjunct) but his literature confronts Pluto themes with a Uranian twist.

And this, from Vineland: 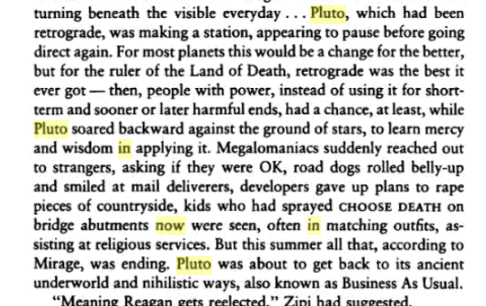 Good read, I ‘ll look him up. With Pluto Saturn and Jupiter trawling through my 8th house – grim phoenix is perfect description. Apart from 6 deaths in the family, near death and cancer and too many other things, i’m slowly Powering Up

Love these Pluto quotes & so fitting of my mood right now because it’s Plutonic times chez moi with Sun/ Merc /Venus steaming through my 8th; surrounded by plague & news of an aunt, the multi-Scorpio family matriarch’s death this week. She had been ill for a week with the virus, but stoically refused to go to hospital, claiming that she’d had a good run & didn’t want to spoil it now by dying surrounded by strangers wearing masks and plugged into some machine. She got her way as she always had for much of her 91 yrs, & then… Read more »

This is so poignant and what a beautiful testament – I had a multiple Scorpio grandmother – I remember when I first saw her in a group of her chronological peers – she stood out like she was powered by a different energy source.

Thank you Mystic. Yes, that is such a good description of these haute Super-Scorpios, they do seem to be a breed apart. My aunt used to remind me of a female Horus – sharp af.

My Scorpio grandma is the same! I have pictures of her with her friends where they’re all smiling and it’s like she’s posing for a corporate headshot. It’s a smile but it’s poised, elegant, knowing.

Reading these is such a lift to my ego

Ooh nice writing. I’m going to have to hunt down his books. Does anyone have a suggestion on which one to start with?

Something about it reminds me of Bukowski or Hunter S Thompson. Is he of that generation of writers? (assholes who wrote like demigods)

Gravity’s Rainbow is as fantastic and trippy a read as you could hope for.

And then there was Pluto the Puppy. In Snoopy or Disney? Just to lighten up the Pluto vibe 🙂

Saw a joke the other day ‘when were the Simpsons ever wrong’.

Never. Not even once.

About 20 years ago i did a fascinating course on karmic astrology. As part of that, we were introduced tooth idea that the outer planets (beyond Saturn) were as yet manifesting in a very negative sense, as humanity was yet to come to grips with their powers and learn to use them effectively. So Uranus manifested bloody revolution, Neptune brought about mass fantasy and hallucinations and Pluto demonstrated abuse of power and wealth to the detriment of all. We have to grow up and just grow a huge amount in our use of these massive forces or we will be… Read more »

Everyone is barely dressed and barely visible, a decadent draped vampire harem chained over leather sofas clutching wine glasses of his blood just starring at each other, communicating in complete silence.

and “stuck to within a few degrees of its cusp, trying to get out of libra” – what an EPIC line
I think if my natal pluto would speak it would say this.

The Vanadium Lightyear posts on here have Real Housewives Of Hades! That little bit where they introduce themselves as the start is real interesting – “Being disincarnate hasn’t stopped me from outshining all of you bitches” – “Dead but still ahead..” – “You WISH I could haunt you…” – “They call me a Night Hag but I’m the reason your husband wakes up smiling” and -“The first thing I did was to go find Oribe and then Way Bandy” I would love to expand on that but I think only a very small amount of people appreciate the genre lol.… Read more »

Amazzzzzzzing. I love these! Thank you Mystic
Yes…. it is a niche but- deeply appreciative audience this genre of humour.
I relate….

Oh no way, many differently voiced posters here LOVED Vanadium Lightyear. Not only does it crack me up, it’s so close to the bone it inspires me, and i start mentally narrating my life in her dry snappy style 😁

Not read him but I may have to now. Everything I pick up and skim through these days seems so banal and not particularly well crafted. I like a book that makes me reach for the dictionary and re read sentences and then whole paragraphs. I love a deep grasp of language and often Will re read a sentence for its evocative beauty. Texting has been my downfall. Blunt minimal shots of information. High cortisol, fast paced bullets. A good book is like an old lover with whom you can spend a long weekend.

I’ve been turning to fiction recently as an escape from the news and other media for the same reasons. Stendhal, Bulgakov, McCarthy, Nesbo and cancelled my Netflix and Amazon prime subscriptions. I haven’t done bbc or mainstream channels in years and don’t miss them. But my monitor / smart tv gave out earlier this month and ya, the benefits to my mental health have been profound.
I still love non fiction and Gladwell, Taleb etc feel particularly relevant again but the old fashioned escape hatches are I believe the most solid. Dreams too obvs!

Beautiful attitude. Most sentences starting, “My monitor / smart tv gave out earlier this month” would be a plaintive sympathy call

Or, almost a new one, because you never remembered his name and his looks have changed 😆

“deliberate resurrection…no grace, no interventions by God.” Reminds me of Pluto going over the Ascendant. Such a perfect description. I don’t know if it’s his Mercury in Taurus combined with his Neptune being in Virgo, all I know is I HAVE to read his work now. Thanks for the introduction Mystic.

It has me thinking about the nature of Pluto opposed Sun.

Is Pluto opposing your sun in your natal chart milleu?

wow this is unusual, no?
must get my pluto tattoo
i have jupiter and moon opp pluto…i do love him….but then i have venus pluto conjunct

Recently began a re-read of his Crying of Lot 49 for the 5th time. Will update this comment if I find any Pluto material!

Who am I kidding. The book is about a woman who is named as the “executor, or she supposed, executrix” of her deceased ex-boyfriend’s will and in the process discovers a conspiracy within the postal system, cheats on her husband with an actor-turned-lawyer, escapes the grips of her Nazi psychiatrist and does a fair bit of drugs with a band of kids called The Paranoids. It’s all Pluto.

Love this heavy vibe he gives off, yummy leathery batwing baroque tones where words are gravel paths granted intense meaning, crucify the glib! “Don’t say it if you don’t mean it Pluto” is square my little stellium including Mercury in the 2nd. So yes.

Hehe, my Pluto can be lethally precise, as he is in Virgo and opposite Saturn. But maverick as he conjoined with Uranus and Mars…

He squares my ascendant so yeah. I get it. Phrases like “ don’t take it personally“ make my head explode