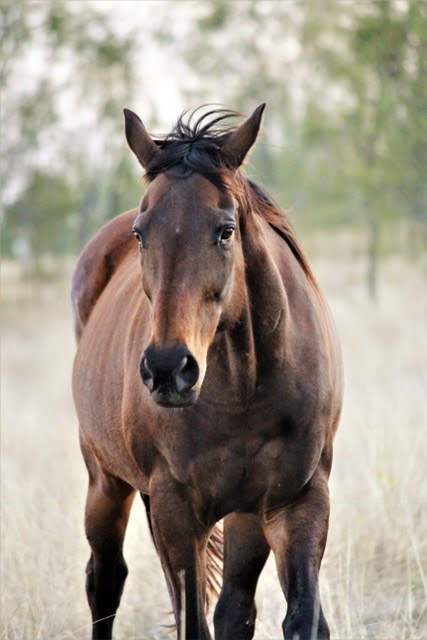 It is Pluto’s Birthday Today!  As many of you know, Mega Mystic members have a sponsor animal: a rescued racehorse named Pluto!   A hideous amount of healthy young horses are slaughtered each year as they are not ‘fast enough’ for racing.

Pluto was going to be one of them, and in fact, she twice survived. Pluto was first sent off to die as she was not making her owners enough money but bought at the last minute to become a broodmare. However, the treatment meted out to her in racing had left her unable to sustain a pregnancy, so she was again sent off for slaughter but was last-minute rescued by SAHA.

She was re-christened Pluto, for her ability to go to hell + back and her rebirthed, happy life as a foster-mother for rescued foals.

This is a photo from ten days ago and as you can see, she is pretty chilled these days. Below is an update from the SAHA President re her current vibe.

Pluto is very much leading the life of leisure at the moment! She certainly has done an amazing job in the past with orphaned foals, but she did start showing us with the last foal she looked after that she was ready for some ‘me time’ so we are giving her just that!

She is enjoying still having access to grass as her foster carer has a large property, so they haven’t been hit quite as hard with the drought and still have grass available in their paddocks whereas a lot of other areas are pretty much down to dirt!

She did enjoy giving herself a beauty treatment the other day when they had some showers come through, she took great delight in finding a few puddles and enjoyed her rolling dirt patch and gave herself an all over mud pack! 🙂

SO thank you to Mega Mystic members for helping to (1) keep this site free of advertisements and (2) keep Pluto in clover.  Also, if you want to rescue another racehorse or contribute to the upkeep of one, check out Save A Horse Australia (they have branches in other countries too, I think).

Is it just me or is racing and gambling super 20th Century and retro?

Love Pluto.. and SAHA. She’s looking good and relaxed and has many content years ahead of her I’d say.

I hate horse racing, I hate greyhound racing, I hate race days where silly twats competitively frock up then get rotten drunk, and there is a convenient general amnesia about what actually happens to the animals involved.
Only a couple of steps away from bullfighting ):(

SO RETRO ugh…racing and gambling I mean, of course 😀

Love that she is having a happy relaxed life now. Happy Birthday, Pluto.

Of course as a multi Sagg, i have strongly disliked horse racing. Can’t watch it on TV or personally. Glad to see people objecting to horse racing being advertised on the opera house in Sydney

And just around this new moon!

Happy birthday, Pluto. <3 You're doing God's work, Mystic. She's so lucky to have had you pop into her life.

Happy Birthday to you Pluto!

Love that Pluto is described as needing Me Time. Love that she is cared for and has a life of her own.

Gambling has morphed and will be noted as problematic but currently buried. Not where you think, either.

Well done Mystic. This is a real tribute to the wider service you provide to our humanity x

Happy Birthday, beautiful Pluto! Thank you, Mystic, for making all of us Pluto’s supporters.
and yes 20th century….

Happy birthday Pluto! Thank you Mystic for stepping in and for giving us the opportunity to support her. Absolute hearts

This makes me even more happy to be a Mystic Member!
Happy B-day Lady Pluto, so glad you had a second chance.

She still looks like she’s in training What muscle she has !! Horses are very much like people in that there are personalities and physiques that are uber athletic and they thrive others (and it’s a sad fact but the majority ) just aren’t. The race world is a male dominated arena and as such is lacking in a core empathy. So yes it’s about time it understood it’s role and who the actual stars are.

Awwww!!! Lady Plutonica how happy I am for you 😀 . Plutonica is a lucky girl, it’s a hard knock life for an slow girl I gettit lol.
My son has equine therapy with a boy horse who could be her brother. He is so slow and gentle he is the Ferdinand of horses. My son calls him ‘donkey’, shamefully it rather suits! But I I adore donkeys. https://m.youtube.com/watch?v=MIQKlHSD89E

Happy birthday Pluto. May you always roam freely through the green paddocks of your equine universe. I am so happy to be very small part of giving you a good life. Thank you Mystic.

So beautiful and inspiring

This makes me happy!

Both gambling and racing are fake glamorous industries with beautiful dressed up women making goo goo eyes at woeful tossers. Scratch the surface though and the stories like Pluto’s emerge. So glad she’s living such a wonderful life now. Is it a bit Plutonic that her birthday came this year after Pluto went direct? Or does Pluto go direct around the same time every year.

Happy birthday, Pluto! I hear you, Mystic. As much as I love the combo of obscure hats and having a good time, racing as a past time is indeed antiquated. Don’t even get me started on the current Sydney Opera House shenanigans.

Pluto is goregous! And I love the idea of animals being foster mothers <3