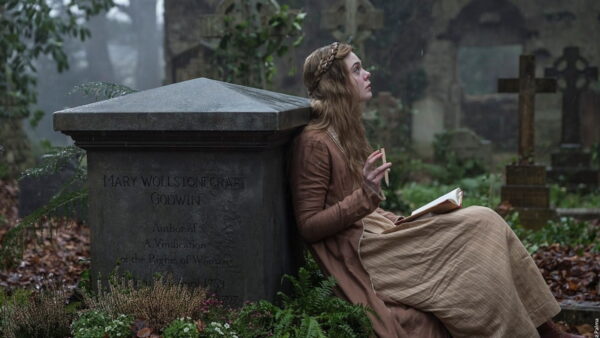 “My choices made me who I am and I regret nothing.”

Frankenstein author Mary Shelley was electrifyingly ahead of the era she lived in. She wrote poems, plays, and novels. Her work included the first recognizable ‘sci-fi’ and ‘post-apocalyptic’ fiction. Shelley’s mother was the prototype feminist Mary Wollstonecraft (A Vindication Of The Rights Of Women). Shelley wrote, loved, birthed and ran households. She consistently reinvented herself and her art throughout a turbulent life.

A multiple conjunct Virgo, she was also a Uranian, with her Sun conjunct Uranus, Mars + Mercury. But it was her Pluto at 29 Aquarius aligned with the Midheaven that seems to shine through the centuries. Her legacy was unique and her life that of a Pluto-charged person. Life/Death/Rebirth again and again.

The screenplay/script for the new movie – starring Elle Fanning – is by a long-time Mega Mystic member. I can personally attest (with her permission, obviously) that this film script was a Pluto transit project. There is basically no way you can write (or even think) about a female life featuring such dark, passionate themes without dredging deep into your own psyche. As many of you will know, it can be challenging enough being a creative in this time, imagine doing it in the 19th Century? Or earlier.

Weirdly, that 29 Aquarius degree recurs in some other significant female scribes.  It seems that the Aquarius/Uranus astral signature was super-useful for individuating in an age with a huge value on feminine conformity. Or where to even claim the space you needed to work was a revolutionary act, let alone writing about sex, aliens, monsters and all.

Charlotte Bronte had her Moon/Saturn conjunct the Pluto of Mary Shelley.

“I care for myself. The more solitary, the more friendless, the more unsustained I am, the more I will respect myself.”

And Aphra Behn, who is my favorite of all historical female writers, had the exact same Saturn!

“All women together ought to let flowers fall upon the tomb of Aphra Behn, which is, most scandalously but rather appropriately, in Westminster Abbey, for it was she who earned them the right to speak their minds. It is she–shady and amorous as she was–who makes it not quite fantastic for me to say to you tonight: Earn five hundred a year by your wits.”
Virginia Woolf

Like Sappho, her true story is lost in historical mists and no doubt some patriarchal dismissal of her awesomeness. She was the first female playwright and supported herself and children via her words. But as a “libertine” – aka unmarried woman and single mother without any aristocratic status to afford her protection, her ‘loose morals’ were often condemned.

So, some discussion points.

Can we draw contemporary inspiration from the lives of these sensational women? Fuq yes.

Strange Resonance With That 29 Aquarius Degree? We need more info.

Her Saturn Is Showing

Lilith In Sagittarius Is Less Than A Month Away

My fave, Gabrielle Colette author of Gigi, is another great woman writer, who was so ahead, or maybe transcendent of her time! She was an Aquarius..

I’m looking forward to the movie! I drastically overlooked the Romantics back in Uni (probably because my life had enough drama going on as it was, and they were the Ultimate Drama Squad). But I’ve found as I’ve aged I’ve been appreciating them more. Mary Shelley and her works that have been more widely read and experienced (via movies, tv, etc.) than any of her contemporaries! PB Shelley, who was born in privilege but tried to speak for those without it. Byron, who lived such a messed up life, but died trying to help free others. They were all so… Read more »

I have Mars on 29 Aqua in my 4th house conjunct Jupiter, Neptune, chiron and AC. Phew! Also within a couple degrees of my moon and true node. Hoping this means I too shall be a sensational woman …

Awesome! Mystic Members following their bliss. This film will now for certain have a dedicated following, absolutely including myself! My South node is as 29 Aqua, which is the past life thing, bringing in skills. North node in Leo, does that mean I need to go big or go home?
My son is the only Leo in my life, and I’ve just noticed he’s got Neptune at his 29 Aqua station.
Congrats on this piece of Plutonic catharsis. I can’t wait to watch 🙂

I’ve got that south node too! So curious and so odd — esp as she as been a muse for a long time from when, virgoing out after reading Frankenstein, I found out she was not only a Virgo but born on my birthday! It completely blasted wide open the “Virgos are prim and prissy” myth which, as a quadruple Virgo — sun, asc, mercury, pluto — I’d been living under. (I didn’t know anything about pluto and the continuous rebirth/reinvention thing at the time!) Now, as I look back it might have been the subliminal message that sculpted my… Read more »

Wow! Interesting. Is this your project? I’m an aqua sun, but as mystic pointed out in the recent 15mins of exquisite chart rant, I’ve got multiple Virgo going down, which I was aware but hadn’t really ingested. I’ve always believed that if you want something done right, you call a Virgo. They are renowned creatives (Musicians much…) and I’d never equate them with prim and proper. Just details max. Maybe that’s how the confusion started. I get that “you’re not like other people” as well. I think it’s a badge of honour. I think it’s easy to see how people… Read more »

“I’ve always believed that if you want something done right, you call a Virgo.”

Also that sometimes the unfinished job is a creative work that hooks into the broader inspiration that the Virgoan Unfinished Yet has inspired for a lowly (to Virgo) mass public via another media savvy person’s skillz to pay billz.

You see it here in echo first..? Or you see the work and its blitz..?

Audience is the first form you have no creative control over, yet keeps creating.

I forgot to say – if you want something done right, you do it yourself! haha

My historical interest is P.D Ouspensky – I find an amazing affinity there. Even knowing what’s coming on the page before I’ve read it.

Wow, absolutely going to see this film. My mom is 29 Aqua Venus with her sun and mercury in a tight orb. She is incredibly private with her Self. Going through a Pluto thing myself, squaring my nodes. Just returned from a Pluto themed trip – visited my Pluto line in the desert. Went to the observatory where Pluto was discovered. Hung out at vortex spots. Spent some time with my sister in law’s Sag parter, looked up his planets and his Scorpio Mars and Pluto flank my Uranus in Scorpio rising AND his Jupiter is conjunct my SN. Brought… Read more »

Charlotte Bronte was ultimate love zombie – her letters to her beloved teacher Monsier Hefner could make you weep they are so full of longing. He was a total mind fuq too – blowing cigar smoke inside her desk and having intellectual frisson over her essays. I like to think they stole just one kiss for Charlotte’s sake. Love Mary Shelley so brave she ran off with Shelly and ruined her reputation and had such sorrow at her dying children – she kept his dried heart in a handkerchief in her writing desk. Such magical women … my love zombie… Read more »

awesome timing for this post and the ideas btw MM. thank you 🙂

I read an interesting thing somewhere about her Frankenstein tale and its relationship to feminist thinking at the time. I will try and relocate it as it was very interesting. I think the author might have been Siri Hustvedt. Recently been doing some more thinking about the dismissal of women’s talents and abilities (and un-fed capacities!!) – that this brushing-off is a childish symptom of fear of not being as-good-as, or facing extra competition. I’m giving this more thought as I have seen wierd politicking behaviour from Libran-Virgo boss that has illustrated this thought process (wierd to me as my… Read more »

I love her. I based my Masters in Creative Writing artefact and exegesis on her ideas and themes. She is my hero.

FYI my ninth house is at 29 Aquarius. So yes, strange resonance that I may have with her, considering the house’s link to higher education. Or perhaps I just strangely resonate.

this is what the sabian symbols have to say about 29 aquarius: PHASE 329 (AQUARIUS 29°): A BUTTERFLY EMERGING FROM A CHRYSALIS. KEYNOTE: The capacity to utterly transform the character of one’s consciousness by radically altering the structural patterns of everyday living and the types of relationships one enters upon. This is the second time within a very short span of the cycle that the butterfly symbol appears (cf. Aquarius 25°). Here what is emphasized is the process of metamorphosis itself. It is the fourth symbol of a five-fold sequence and it stresses the essential character of the activity required… Read more »

.. its conjunct my ascendant (first house) on my progressed chart!

& in my birth chart, it sits neatly in the middle of my second house .. opposite jupiter on both charts?

& in my birth chart, it sits neatly in the middle of my second house .. opposite jupiter on both charts?

Mystic, have you read Romantic Outlaws? It’s about Mary Godwin and Mary Shelley. A fascinating comparison of their lives.

Ooh! I’ll check that out…

Pretty freakin cool. I hope the movie does her justice. I concur with Pluto activating dormant creativity. Pluto is grooving with my 5th house Taurus Saturn right now and my 9th house Virgo Mercury/Mars combo and offsetting all else, including Neptune. In fact, it’s boosting Neptune into the stratosphere in a good way. Never thought I’d be this grateful to Uncle Pluto. I also have Pallas Athene at 29 Aqua, conjunct my NN at 1 Pisces. It is indeed an electrifying point.

Cannot wait for this film! Frankenstein is one of my favorite books.

I’ll take it! With Pluto transiting back and forth over my moon at 19 Cap in the 9th house, a creative renaissance would be the most awesome manifestation I can imagine. Maybe in the setting of several months in France and accompanied by a handsome paramour.

I cannot wait to see it!

IF pluton in aqua did that, in THOSE repressed constricted years, for” (upon? from?) womahood all around, what can we dream it will be like this time around? i get it, it focused maybe on individuals, weird, since acua is group.master till fed up…i kinda have a S&M future relationship with plu going to my 8th house sun and vertex…i also feel it may the end of this embodiment of self..we ll see…i ll share news with u, from this side or… 😉