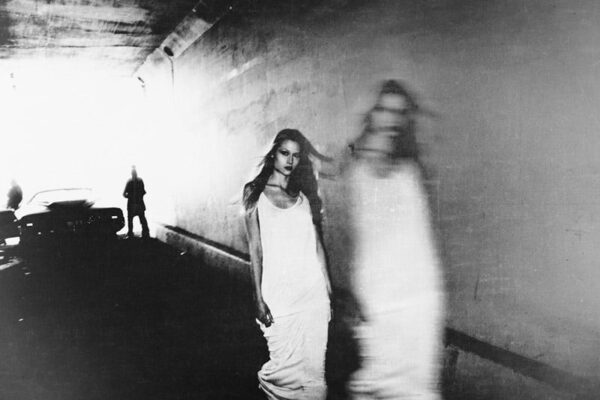 Some mistook them for Vampires. Maybe it was the matte-face and monochrome. Or their world-weary demeanor. But Vampires counted their life span in centuries and had the reference points to prove it. The protocol of dead empires lurked within their psyche. In their eyes, you could see the reflection of cities razed, rebuilt and razed again. Now that mirrors no longer included silver in their manufacture, Vampires had become vain and pointlessly nostalgic. They were a walking time warp. Vampires thought the Space Dust Shamans uncultured. Space Dust Shamans became literally ill at the aesthetic of most vampires. Any affair between them quickly devolved into a tabloid nightmare. It had been tacitly agreed that they would never again attempt to mate. Let alone breed.

By contrast, Space Dust Shamans lived defiantly in the now. Even if they did want to recall – say – last week, they would be barely able to. Facial neurotoxin had crystallized their third eye and opened a new, previously unknown to even the sages of Atlantis, neural dimension. Other than Space Dust, they lived off bone broth and E.M.F.s, working in digital, fashion and the propaganda end of politics. But secretly they saw themselves as Karma Brokers.

Their relationship with Space Dust was, they insisted, entheogenic. They were able to commune with its spirit every bit as effectively as someone on ayahuasca seeing jaguar spirits. Only the Space Dust Shamans did not like dirt, bugs, leaves or the way that trees chattered all the damn time. Their sprites were city daemons and the messages came via sigils concealed in street graffiti. Sex was but an adjective used to describe – say – the design of a new Porsche or table lamp. Dub-core grounded them. They were patiently waiting for Pluto in Aquarius.

Let’s imagine Millennials are called as such because they are beings who have literally been around for Millennia, and now incarnated on earth in the labelled Indigo and Rainbow forms, they are opposing the existing systems and structures in such a Ghandi style that it will yield some significant ‘new’ paradigm. People roll their eyes at the Millennials, and their different attitude to work and avocado, not realising that their own jaded world is going to morph into the alternate reality they’ve only every debated about in free thinking company. Unfortunately they’re too hung up on ‘Millennials’ as a buzz-word… Read more »

I can see this crossing over into Vanadium Lightyear’s realm, yes

And nice theory with the millennials!

It’s an idea in progress 😉
Thanks Mystic. Great post.

Like the legless, non copulating Cervidae, l still have no fuqn idea.

I thought of asking once about your take on the Neptunian-Uranians (Nepturanians? Urtunians?). Thanks for the magical analysis, validation. X

For the record, space dust’s is one of the only spirits that never agreed with/stirred mine. Rejected or saved? Depends on the vantage pt

Resonates with mine way too much, including a family lineage/history of overindulgence to the point of financial and physical ruin.

I have some Neptunian tendencies and really do connect with the spirits inherent in plant medicine.

But, no … Space dust is one that I’ve firmly drawn a line in the sand … Errr, psyche about.

The spirits inherent in *everything* Like, can’t shut off the communion. This can be magic or ruin, depending who/what/when, etc Lightning pole type magnetism. Carries one through to previously unseen dimensions but can just as easily shut down the heart in an instant. Or is it just that same old dream again? Angelic and/or volcanic outbursts, morphing like ocean currents or hot/cool fronts on extreme days. Onlookers may never notice a shift. Maybe the vamp and a shaman did have some little tryst once upon a time, left the babe at a convent and there came my grandpa Odin, lol,… Read more »

I absolutely love it when you post this particular style of your writing.

Where am I? What just happened?!
Haha, this is great 😀
Dystopian, dying alien worlds, chemical magic and ayahuascan word art. Is this a genre? I need a reading list if so.

It’s a genre now. It’s like a transmission from a parallel universe suddenly short circuits daily life. Like when you drive past a radio tower with the car radio on

Mystic, this one is a trip! Any remotely judgy ins8ght is mitigated by such depth of in-the-shoes-and-eyes-of, intuitively perceptive detail. Loving the social comment but also really thinking m7ch more profoundly about these 9bservations. Had a strong conscious flash of my own social vanity in context of …. well, sudden events and comms have me wondering. I keep recalling that “the superficial is more profound than you think”, wh8le understanding there is more to my own feeling than meets a 12th house Moon Neptune eye. Definitely need to shake loose the graveyard patterning. Not even sure what i mean by… Read more »

Number typos..phone keyboard. Leaving it in case i look back and it pings something through numerical assoc!

Ha! I wondered if there was something really deep going on with the numbers!

The Space Dust Shamans are not very Uranus in Taurus, are they? 😉

kind of like the tone of that fash tale, the one who was allergic to any kind of branding and could only wear Lowes flanno shirts and Rivers jeans with the labels razored off or something.

Compelled to note that Gemini rising will never do monochrome as a rule, and sex most definitely remains a noun. Will never quit leaves and chattering trees #9thhouse4eva #stillalive

cool vibe though. Appeals to my cappy moon and aqua mars. hmm *thinking*

I get that I’m obtusely missing the point, but I think mars is really sinking his heels in right now

Holey space weasels, Mystic, where are you getting you space dust from?! Also, I so want to write the novel to accompany this right now….daemons and graffiti sigils! MIND BLOWN. AT WARP SPEED.

“Facial neurotoxin had crystallised their third eye and opened a new, previously unknown to even the sages of Atlantis, neural dimension.”
I had IPL on my third eye area (and face obs) and BOOM that was visible in my brain…literally

This is like the summary of Cat Marnell’s biography….

Well spotted! I have not read the biography but Cat is absolutely a Space Dust Shaman!

Update: Just ordered it on Kindle

dark star
Reply to  Lux Interior Is My Co-Pilot

Gemyogi
MM Member
Reply to  Lux Interior Is My Co-Pilot

Just googled her and love this motto:

Gemyogi
MM Member
Reply to  Lux Interior Is My Co-Pilot

“I think people are going to get obsessively creative under Trump,” she says. “Like what happened in the Eighties under Reagan. Symmetry, Instagram, Kardashians – it’s over! Money is over. Rich people need to get weird again, like Diana Vreeland used to be. Like, why don’t you quilt yourself a coat of white monkey fur and meander around your apartment?” Cat Marnell

Like a cross between Blade Runner & Strange Days with a dash of American Psycho… love it!

Love this: and I am totally feeling the dichotomy in terms of the long memory and deep time conciousness of my Capricorn rising versus the adaptability and unconventional forward thinking of my Aquarius self.

Doing something pointlessly is a real privilege.

I could be more political about this but usually choose to turn my judgment inward to figure out what in heck might … silver the mirror… to borrow Mystic’s incredible metaphor.

Hahahahahaha. funny you are!