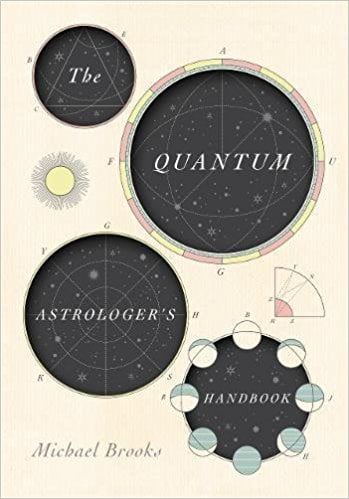 If you’re part of the small set of people interested in Renaissance Astrology and Quantum Physics, voila.

“In the waning weeks of 1570, the polymath Jerome Cardano is in a frigid prison cell in Bologna. His biographer from the 21st Century, Michael Brooks, shimmers in for a chat. Why not? In quantum physics, a particle can meddle with another from across the girth of a planet. Time can flow backwards. A spectral science writer, Brooks suggests, fits in with the mind-bending oddity of our universe.

Brooks is drawn to Cardano the man: the superstitious gambler, the chaser of fame, the astrologer who dared to cast the horoscope of Christ. We both believe that space and time are not what you and I have been raised to believe they are.”

The Quantum Astrologers Handbook looks fascinating, although it focuses more on Cardano’s genius in mathematics and physics than his astrology. Cardano’s Cosmos is about his actual astrological practice and techniques, in the 16th Century.  I just ordered and will incorporate anything super useful.

Long before I knew a single thing about quantum physics, I thought time could flow in all directions. It reminds me of Einstein and Newton time or, as I call it, Saturn and Uranus time. The best parts of Cardano’s Cosmos are the gritty little descriptions of everyday life as an actual practitioner of Renaissance Astrology. Like now, it sometimes involved too much coffee and paranoia about Saturn.

When I was a kid this was how I thought. When I was first brought in for testing I described it as feeling like there were 13 tracks with trains in the station and all of them had to get out of one tunnel. And usually they crashed before they got out. But when they did they were car after car of treasure.

Then I grew up and,well…

There have been significant improvements to the rail system, but we had to shut down a few tracks.

As a Taurus I love to be grounded but as the rest of my chart is ultra plutonic/scoripionic and a blast of Neptune I am very much aware of many worlds and dimensions. One of my shamanic teachers had been an Astro physicist and was taught by the hopi that time is holographic. Particularly in ceremony I have seen time expand to allow sp many things to happen..my teacher lived with the hopi for 15 years and she wrote about how in one of the kachina ceremonies time indeed seemed to go backwards; folding on itself! And now the 9… Read more »

Yes, space and time are mysterious subjects with dimensions that haven’t been fully explored. There is the inescapable fact, however, that those of us who aren’t on space dust or in space crafts live in bodies governed by gravity and predictable time zones. Not to negate the truth of astrophysics, I find it best to keep my feet and head firmly in the here and now and limit my time/space travel to sleeping hours.

Subliminal slip! I am thinking the same. So eerie out

fabulous topic! i am interested to check out both these books.

speaking of time, i have just been complaining about how looooooong today at work is. i feel physically uncomfortable as time is passing ludicrously slowly. i can’t even manage right now to pull out my planner and plot ahead because i can’t think.

What an awesome sounding book

Can this concept of time flowing in different directions be connected with the Shapley 8 Cluster at 2 degrees Scorpio and said to be the driver behind the Galactic Centre, the Great Attractor and ultimately the course of our solar system. Jupiter will be bigging it up (as if Shapley Cluster needs more bigging up) on October 21st. I would appreciate your comments MM on the blog – you know a little more grounded comments (ha ha) from those cosmic intelligence agency astrologer sites. Still looking for LIbran balance and the nostalgia of Jupiter having just been there this past… Read more »

Shapley 8 cluster?? Never heard of it. But it’s smack bang on my MC… *scurries off to google……

Conjunct my ascendant then. Hmmm

Perceptually, for me time/space is a bit like a spiral, in that ‘old ground’ is covered over and future ground partially perceived, as one is ideally always ascending. So you see the same patterns from where you are, but hopefully each time from a higher perspective. This resonates with major transits as they hit, rewind, hit, rewind and then finally hit again. Been reflecting on this heaps with saturn square my sun, moon, mercury from March till Nov this year, and Chiron back and forwards over my moon since Feb till goodness-knows-when. I noticed that Saturn sextiling my natal Chiron… Read more »

Totes feeling this. Pluto has been hitting/rewinding in succession my descendant, sun, Venus, Lilith, soon mercury… Sometimes because of Pluto’s slow movements it feels like the record player got all jammed but I guess that’s the point. We get to repeat the mistakes over and over until we understand 🙂

I’m too punch drunk to understand.

Time can be introspective and is experienced internally relational to our physiology too. Martin Schulman speaks of retrograde planets / karmic astrology. Retro mercury Pisces conjunct Fomalhaut…

I’ve got retrograde pieces 12 th house conjunct Isis conjunct my ascendant in Scorpio. Would love any insight. Certainly have a feel for past lives and priestess ing. Painfully psychic when I was younger til got techniques to cope and not just red wine! Will look up fomalhaut!

This is one of the most exhausting dark moons for a while. I couldn’t get to sleep and woke at my usual time, hyped up. So much to do and so many things to write on my to do list. Feels like things are finally starting to move and it’s spring here and feels quite new. It’s exciting, but exhausting for this triple Taurus Aries rising Gem.