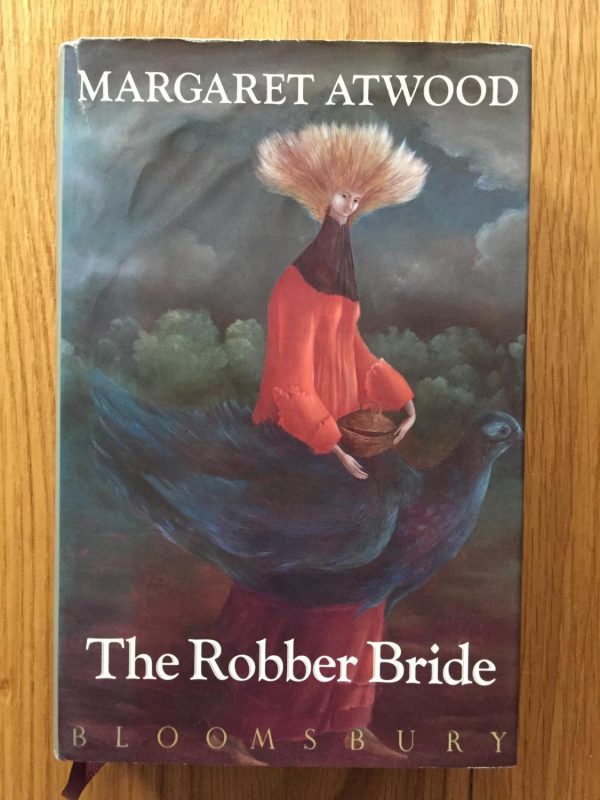 Margaret Atwood loves astrology, uses it in her novels (please tell me Handmaid’s Tale was not a take on Pluto in Capricorn) and has Moon Mars in Aquarius. That’s possibly the best placement ever for cool literary eloquence around dark, dystopian subjects. You can also see it in her futuristic consciousness. How prescient is she?! Atwood is the poster-person for Mercury Retrograde genius and is a high-functioning Sun-Moon square person. She has a Scorpio Sun exact square her Aquarius Moon. She could flip between emotional depths and Uranian high-sky objectivity; perfect for a novelist.

Moon Mars in Aquarius Is Spaced In, An Alien Warrior Psyche

She has a new book & this is from the promo piece in New York magazine:

You could almost mistake her for a publicist-bot, she’s so casually cross-promotional, and she’s similarly anything-goes in her life offline (the ever-availability being a big reason people find her so chummy and familial).

She showed up posing with Klingons at Comic-Con last year, co-created (and recorded a voice part) for a mobile game called Zombies, Run!, and wrote the libretto for an opera about the late-nineteenth-century Canadian, Mohawk, and English poet and actress Pauline Johnson that’s scheduled to premiere in Vancouver in May 2014 (it involves, typically, “a secret love, a jealous sister, and an early death”).

I have Gemini Rising, says Atwood with a laugh

“I have Gemini rising,” says Atwood with a laugh. “Gemini is the twins, so if you have the twins as your rising sign, you’re not going to have a problem with multiple anything: careers, forms in which you write, personae.

She’s totally across her astro: this is from an interview in 2011.

Ms. Atwood, writing in longhand, creates a tree of characters and charts that pinpoint their birthdays, and even casts their horoscopes. She sees in astrology a device to get people to talk about themselves. “You  wouldn’t want your character to have the wrong horoscope any more than you would want them to have the wrong name,” Ms. Atwood said mischievously.

The Sun Moves Into Scorpio, Tony has lunch at the Toxique

“The sun moves into Scorpio, Tony has lunch at the Toxique with her two friends Roz and Charis, a slight breeze blows in over Lake Ontario, and Zenia returns from the dead”

The Robber Bride is one of my fave books ever, with Zenia as a very Lilith archetype.

I have read and really enjoyed The Handmaid’s Tale and The Year Before the Flood.
Will have to read more.

Lux Interior is My Co-Pilot

She is amazing, and I LOVE that she is an astro fiend!

Do you think you could get an astro-interview with her?

Cats Eye is amazing. So is The Blind Assassin.

haha……..I have Gemini rising with toooo many planets to mention conjuct in Scorpio. At the moment I am running 3 businesses and studying a masters and raising a teen on my own and…….well any number of other things…..as my good Gemini friend says ‘the more the merrier’…….some say ‘wow you’re really creative’, I say yes either that or crazy!

The Blind Assassin by Ms Atwood is one of my favorite all-time books! Being a Scorp/Gem/Gem sheds some light on it for me, I never thought to look into her astro. <3 thanks

Yeah yeah! Loved The Blind Assassin- especially the little Sci Fi stories Alex tells Iris. She and that grand Dame of Sci-Fi, Ursula le Guin (also a scorp) had a very interesting relationship conducted through critical essays on genre fiction. Atwood always insisted she WAS NOT a Sci Fi writer. Le Guin pretty much said ‘You can deny it til you’re blue in the face, but you ARE a Sci Fi writer, woman.’ Always got the feeling Atwood was a bit Ice Cold biatch-y, but she is a great writer. Also loved Alias Grace.

Love her! She’s one of my favourite authors and all around inspirations but then again I’m Gem sun and Scorpio rising. She answered me in my own language in twitter a few weeks ago because I recommended her books to a friend of mine. I’m still over the moon.

This has really got me thinking: I don’t think I’ve sat & read a novel in… 20 years?! Seriously, I’ve been too busy reading everything else & I don’t know where the time has gone. So thank you, Mystic, for putting this in my face! My upcoming hospital stay will be the perfect time to do some catching up 😉

Love love love Atwood!!! Just bought this 2 days ago. The woman is a genius

I like her non-fiction works more than I like her fiction. Her mind is powerful. Pay Back is a good one. Writing with Intent is another. Last week, I started to read her Sci-Fi book (short stories) but took a break to digest the ones I read.

Payback is an excellent book. looks at the idea of debt on a number of levels. Your comment made me fetch my copy and just randomly picking through the book leads to a number of quotable quotes, viz ‘if your rebellion succeeds, it’s a revolution. Otherwise it’s just a rebellion.’ and this, from the last page, ‘Maybe it’s time for us to think about it [debt] differently. Maybe we need to count things, and add things up, and measure things, in a different way. In fact, maybe we need to count and weigh and measure different things altogether. Maybe we… Read more »

Excellent book and movie!
I need to read more of her work.

Sweetie i think you would love R.B. It IS a bit dated and 90s/boomer-esque in parts but brilliant. i met M.A when i was a journalist, she was fierce. It was at time of handmaids tale, i was super young and asked her a series of DER questions, she was completely nice to me but clear. I remember she was full on about how america had ZERO gun control, zero interest in a whole pile of things but a huge interest in controlling womens reproductive options = all this without investing a thing into better contraception etc. She made some… Read more »

Absolutely correct. No gun control (a metaphor for the phallus symbol?) men cannot control themselves and do not want to be controlled but blame women for enticing, seducing and tempting men into rape, and then want to control her body. It’s insane and is getting worse since the 90’s!
So, much slut-shaming, victim bashing in our country. It’s always the woman’s fault somehow!

Ah, yes… Margret Atwood! Such an interesting, powerful and poetic writer. Would be very interesting to know where her Lilith is… I’m thinking she must have an intense Lilith, given her work (am thinking particularly of The Handmaid’s Tale, but really, applies to pretty much all of her work to date).

good question re Lilith – as Zenia in the Robber Bride is total Lilith. I think that + Handmaids Tale are her strongest novels or most resonant to ME But M.A has Lilith in Pisces/11th House. It’s near her Mars, high and mighty in her chart.

Was gonna put her in my Bitchcraft book but was overwhelmed with strong Lilith peeps.

O! How much do I love the fact that M.A. and I share the same Lilith?!! In the same house even! Major inspiration. I looked up her chart on astro.com and we have quite a few aspects in common. Am definitely going to read The Robber Bride now.. I’ve read a couple of her novels (my faves are Cat’s Eye and The Handmaid’s Tale) and I find that they either grab me right from the onset or not at all, but your recommendation for the Robber Bride has definitely piqued my interest. Once again, Mystic, thank you so much for… Read more »

I do believe that if the Great Lakes were the moon, the US borders would be the South Node & the Canadian ones would be the North. A bit of trivia: “Erie” is Algonquin for Cat Nation. The Mohawk Valley in New York is named of course for the Mohawk people, and they established relations there with the Dutch at present-day Schenectady (6 degrees of separation: Synecdoche, New York is one of my fave movies of all time, & a play on the town’s name where the movie takes place). For all the Mohawk presence in New York, their largest… Read more »

Oh– resurrection! I was amiss in not recognizing Atwood’s inclusion of such in that excerpt. Plutonian purrfection, Margaret.

Oh, I loved the Robber Bride too! Time for a re-read. Atwood is truly great and she has a place in my heart slightly to the right and down a bit from Angela Carter.

I looove Angela Carter’s “The Bloody Chamber.” One of the most perfect books ever written.

Angela Carter is my all time fav author, I really like Margaret too but Angela is so brilliant! I have always thought astro is a great tool for writers and now I know.

Oh so impressed! Margaret is brilliant, I havent read all her work so thanks for reminding me. I saw her talking w Jennifer Byrne recently, still on the abc website, Margaret is a very saucy woman!

She’s the best, her poetry just endlessly blows me away.

I love Margaret Atwood. Pretty amazing research. I guess it gives you a very good way to set a scene. I would get confused with fictional characters enough, but then again . . . it’s a good way to give their character a believable ‘edginess’.

Aaah! Mystic! The Robber Bride is one of my fave books, ever, too! V excited to find you are also a fan.

Oh, me too!!! Have loved it since I was 17 and studying English Lit at Uni…

I read Xenia as Lilith